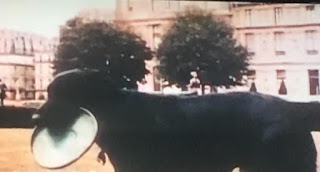 Si quis vobis evangelizaverit praeter id quod accepistis, anathema sit.
If any one preach to you a gospel, besides that which you have received, let him be anathema.

Paul is reaching out to the Galatian churches. (Galatians = Gauls = Celts living in Asia Minor... ) Paul is hurt and angry that people to whom he, himself, has taught the Faith are being hoodwinked by false teachers. These false teachers are showing up and telling all of Paul's Gentile converts that - contrary to Church teaching - in order to really be a Christian, one must first be a Jew. Men have to be circumcised, folks must keep kosher (as it was then understood), no working on the Sabbath, etc.

This argument may seem arcane to us, and perhaps a bit of "uber-geekery": in fact it's very important as the problem persisted well into the days of the Christian empire. It persists even today, with folks not only asking why Christians don't follow Jewish Customs, but actually teaching that we should, even demanding it. Although these are often rather recent protestant movements (none are really older than the last 100 years), a Catholic parallel might be to see these other preachers as the sedevacantists movement of their day. They were so convinced the Church was wrong that they totally denied the validity of what was being taught.

Paul was convinced that these folks were going to lead his Baby Christians astray. Taking that parallel as valid, though, (and you can stop here if you don't) I don't think were in any danger of having a sedevacantist takeove of the Church. I don't think we even need to fear a Trady Tradboy take over of the Church. The other end of the Spectrum gets very Sede too, however.

The liberals reject the teaching of the church as much as the conservatives. The left side of the nave drifts into sedevacantist thought just as quickly as the right. And, especially here in America, but also in Europe and Australia, it is this side that is leading the Church astray into another Gospel.

The dangerous folks though, the sedevacantists, are the ones who say - even with out a change - let's ignore the Church and do our own thing.

These folks are all over the Church. They quietly ignore church teachings and advise others to do so. When challenged they (rightly) reply they have never taught against the Church. But rather than mis-stating the truth, they have not stated it at all. They have not "made folks uncomfortable". They have "accompanied them" and have passed along their own lukewarm faith. They are in pulpits, and teaching positions, leadership roles, and the hierarchy all over the place. (The same is true among Protestants and Orthodox as well.)

The easiest disguise for these folks is secular politics. They create red herrings out of secular political issues and accuse each other of failing to live up to the Gospel of Peach by fighting with their brothers and sisters over political disagreements. They move towards embracing the "sexual revolution" and accuse others of being sexists. They move towards rejecting church teachings on economics and accuse others of being communists. They reject church teachings on peace and accuse others of not being patriots. They want the secular gov't to do something specific (which may be a moral good), but refuse to see that the Christian faith may move others to do the same thing by another route.

These folks are preaching another Gospel. They are not adding to the Gospel new rules like St Paul's opponents, but rather they are leaving out huge and important parts of the Gospel. As we move through Galatians, I think it will be possible to speak of these new sedevacantists as well. Paul was worried about Judaizers. We must worry about Secularizers. Same heresy, but now Blue instead of Red. Anathema Sit, anyway.

“When many Christians will be lovers of heresies, and wicked men will persecute the clergy and trample spirituality and justice under foot, this should be the sign that Antichrist shall come without delay.”
St Birgitta (Briget) of Sweden
Posted by Huw Richardson at 10:17 PM