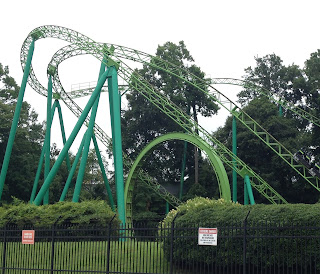 One year in High School our Marching Band raised money by working at Six Flags in Atlanta. I'm unclear how it worked, but basically we performed various minimum wage jobs around the park for one of three half-day shifts and all the money went to the band. In exchange for working 4 hours the volunteers got to spend whole day in the park. It was a fun day (although I will never eat park food ever again) and I got to ride the Mind Bender 15 times.

The Mind Bender opened that summer and was billed as the world's first triple loop roller coaster and I had no reason to want to do any of the normal stuff which I'd done before. This was not only new to me, but new to everyone! Until the pre-monastery purge, I still had the commemorative coin they gave out that year. Anyway, that day I rode the thing until I got bored, literally. After 12 times through (in fairly rapid succession, since I had an employee pass and needn't stand in the whole line), I couldn't have cared less: all my adrenaline burned out, the endorphins went away, and all I had was a jolting and jerking sensation caused by the motion. I was numb. Still, I rode it thee more times, then I stopped.

I was talking to my brother in Christ yesterday over wings and biscuits; there was some beer as well. We were talking about how moral theology has basically two categories: the way God intended something to be (aka properly ordered) and every other way we try things, (aka disordered). It's important to realize that moral theology doesn't use "disordered" as we might when describing a mental disease. It's more along the lines of putting a penny in a fuse (if you are old enough to get the reference), or what happens when you use a flat head screwdriver that is also too small on a Phillips-head screw.


Since the human spirit is made to follow God's will - and yet we do not - we are disordered. Disorder is a sign of the fall. To find in one's life is disordered is to admit that one is human - no less than any other. Given what we know about the human propensity to sin, as my friend said, even ketchup packets are a sign of the Fall. All of Creation groans under the situation caused by our fall: man was intended to be the crown of creation, the Primus below God. That we have fallen from grace disorders all things.

The Jesus Psalter, a 16th Century English Catholic devotion closes with two prayers referring to the disorder of our dance: Jesus, grant me grace to set my mind on thee; and, Jesus, grant me grace to order my life to thee. Both of these points (our minds and our lives) are to be ordered - focused, line up behind, pointing at Jesus. When we say something is disordered we mean its pointing the wrong way. That "wrong way" may only be a fraction of a degree off course, but in the distance of Eternity, that fraction grows until we miss the mark. Please note: disorder, itself, is not missing the mark. We miss the mark when we deny the disorder, when we treat SNAFU as "right".

Imagine that you have a square peg - and you have to fit it in the proverbial round hole. Imagine you spend your whole life shoving and pounding, chipping off corners, trying to stretch the hole, all in vain. In the end, you give up: you settle down, the hole unpegged, the peg without a home. What if someone came by and said, "I have a square hole over here..." It would finally feel as though you'd found a home. You've finally connected. Only connect, as E.M. Forster sys in Maurice, it's the solution to the isolation that cuts us off.

In talking about human sexual expression, "disordered" as category applies to everything outside of the procreative act within sacramental marriage. Anything else is using tools given by God in ways not intended. The Church's tradition, beginning in scripture and unfolding in the lives of the saints, is pretty clear about this. There are degrees of departure from plumb, but all such - even by half a degree - proceed from a fall and miss the mark entirely.

My friend asked me how I - a Catholic man who experiences sexual attraction to other men - felt about that label "disordered". I did not think twice before I said, "Liberating!"

All of our modern world is about catering to our whims, our desires. Everything we do is "because we want too/feel the need to/crave..." It's bloody exhausting! To "follow my bliss" when what I want to bliss out on changes from moment to moment is like trying to navigate with a compass through a maze made out of magnets. We are told that we must consume, that we must get our just desserts, that we deserve more than we have, that when we die we should leave a proper viking horde of stuff and experience behind to prove that we were here at all: when the sex and the shopping stops, we're dead.

Worse, we become so involved in this that we don't even notice when we continue the pattern in strange parts of our lives. Amazon - mistress of all the vices - feels better than therapy. Online dating is only a 70s Singles Bar or Bathhouse that needs no brick and mortar expenses. Church shopping and parish hopping is just the Tinder or Growlr app, but with God. We choose our name, religion, job, residence, friends, medications, and whatever all based on only our drives and tastes; only in hindsight do we realize that "drive" and "taste" are more matters of "peer pressure" and "marketing". "My" taste is not personal to me. I can walk out of the house in purple sneakers and yellow socks firm in the knowledge that there's probably another 100k or so people dressed exactly the same way within 500 miles.

Living a life fulfilling every desire, every whim, running away from every pain and every sorrow, is like trying to dig one's way out of a pit: each fulfillment gives rise to more craving - even if only for a repeat performance. Mmmm that felt good. Do it again! Like my ride on the Mind Bender, we do it over and over until all the chemicals in our brain burn out. Then we just keep going on some autopilot function. Our cravings have turned into an addiction, our lives into empty recreations of patterns we claim to enjoy. But we are not free: we are enslaved to our reasons, our cravings.

No! You don't have to fulfill that whim, that craving, that lust! Let it go: if you hold on it will only take you further and further off course. Simply: Let. It. Go.

Disorder, as self-realization, is discovering the square hole for the square peg. It's realizing that one is human: not special, but average; not unique but a son of Adam, a daughter of Eve. There is nothing unique or special about your desires: they are shared by millions of others in history. There are only differences of response. Desires, as such, are only a sign of being part of our fallen humanity. They are not needs to fulfill, but rather comments on or signs of our human weakness. A disorder - experienced as an action or only as desire - is a sign that we need God. Knowing it is a disorder, something that needs to be reordered, to be fixed, turns it into an on-going opportunity for grace to be poured in. And the Church is both the fountain from which grace is poured and the vessel that contains us as we are filled with that gift.

In riding the Mind Bender, I not only got bored, I also kinda ended my fear-love relationship with Roller Coasters. I don't really like the adrenalin rush that one gets. It's not at all heathy to trigger one's own fear mechanism. I feel the same way about horror movies too. Like, I have only so many "Endo-Dolphins" as a friend's daughter once called them. I don't want to waste them by crying wolf too many times. Using the endorphins this way - a hit of adrenalin, a rush of fear - is disordered in a minor way, just has a hit of lush, a rush of sweaty fun - is disordered in a major way. But we live in a society that says "fulfill it!" at every turn. That's not what we are here for. In fact, we're here for the opposite. And when you grow tired of jamming the square peg into all the wrong holes, you can finally settle down and let the proper ordering of things take over. The Church is the school that not only teaches that solution, but resolves the conflict, and heals the resultant pains.

Recognizing the Disorder and yielding to grace are, in fact, the first three of the 12 steps:
St Paul says, in Galatians, "Christo confixus sum cruci. Vivo autem, jam non ego: vivit vero in me Christus." With Christ I am nailed to the cross. And I live, now not I; but Christ liveth in me. Our cravings produce a false sense of need and that need/craving produces a false self. This is not me. I am not my cravings. I am not personified by my temptations. We crucify our fallen self, as Jesus gave himself up for us so that we can finally live - yet not us, but Christ living in us. Grace (which is God's energy, God's presence in our lives) orders our life to Christ. We can only get there when we see everything is not good as it is. We are liberated by seeing the disordered lives we lead, the disordered world in which we live for exactly what it all is: Disordered.
Posted by Huw Richardson at 2:02 PM