Gay and Catholic - A Reflection - 2nd 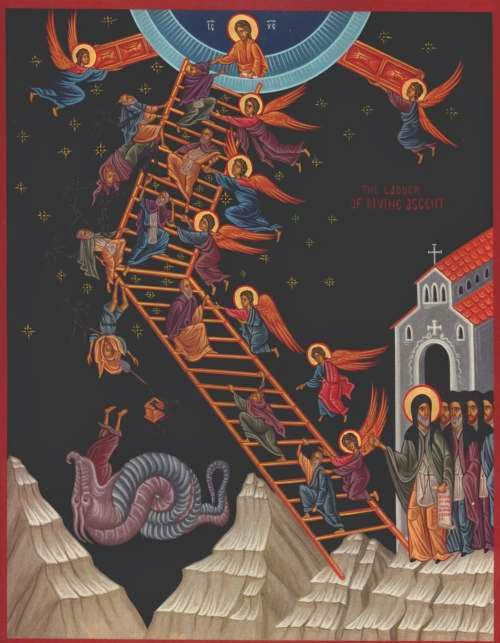 Before meditating on Eve's topic of friendship, a brief excursus on vocation: one is tempted to say "we don't do this in Orthodoxy" but that line is to fake. Generally, though, there isn't much discussion of a "Call" to the priesthood, a vocational idea unheard of in the saints. Thus there is no parallel lay idea of "well what's my calling?" Eve's reflections on vocation - while not using Orthodox language - are very helpful.  As she described her work in a pregnancy center with other women and how this was her vocation, I felt very much as if I'd found a soul-sister walking a parallel path to my own, once described as "Tech Support as a Spiritual Path."

When Layman X is working out his salvation it may gradually dawn on him - as St John Bosco (Roman Catholic) once said - ordination is absolutely necessary for him to work out his salvation. That's not the idea of "vocation" that I hear usually in today's discussions and it's not the idea that I hear in Eve's book. It is, however, despite John Bosco being RC, the idea in Orthodoxy. (I first heard this line in 1984 or 85, so forgive me if I have the attribution wrong! Was it the Cure D'Ars?) When a community is together working out their salvation they come to the realization that you are the right priest for them. This happened to some saints, chased all over town by the parish demanding their ordination. You might say that's a call! But it's a rare thing. It's a near-fantasy for someone who wants to have their ego gratified by having the Church "Call" them to the priesthood. My first realization that I wasn't called at all was a phone call from a priest saying "I don't think you're called to the priesthood, but I'd love to serve a liturgy with you as a deacon."  As I felt my ego deflate the escaping noxious smell made me realize this had all been some ego game.  I had never been  "Called" and I wasn't using this to work out my salvation.

So, for Orthodoxy (generally), we all know our vocation: working out our salvation in fear and trembling. We do have various tools and the selection of those tools falls to you and your Spiritual Father or Mother. The hypostatic freedom of the laity means you have a lot of power in that relationship: it's not one of "obedience" like it would be if you were a monastic although some converts (clergy and laity) act like it is.

Much of the book is about Eve finding a vocation, a second reason this book is not about "Gay and Orthodox" is we don't have vocations as such.  God is not "calling me" to have spent 25 years as a Customer Service agent of one sort or another, but rather, after being in Customer Service for that long, has it helped me get saved? Are your choices furthering your salvation?

It is this same approach that would be used for Orthodox who wanted to explore Eve's friendship model.

In Middle School and High School friendships were the end all and be all of my life.  Ditto in the Fraternity in College.  Because of my fraternity experience, I recognized Eve's discussion of "Vowed" friendships as creating these familial bond ("In Vinculis" or "In the bonds" is how we sign fraternal communications). That's a vowed kinship that holds, in the common law tradition, a more valid claim on one's life than even blood.  A legal relationship by verbal ro written contract made a "real" relationship more than hearts or spirits.  An adopted child is, in some real, legal ways, more my child in common law than a child born in my marriage.  A choice is made and affirmed in law.  It is the same as or even stronger than marriage.

After college, I had housemates - six of us in Astoria, 10 or so in Asheville until I shared an apartment with Todd, 14 in Buffalo, 3 - 8 of us here in SF, until I moved into my own apartment.  Now, if I want social life I have to leave the flat and go to the Church, the Office or, maybe, the Elks' Lodge.  There are volunteer options through work and the parish (and the Elks) but my circle of friends as such is a lot smaller now than it used to be.  Eve's book called me to fix that: to take actions that would send me out into the world in socially and spiritually salvific ways.

Any relationship must be approached as "Salvific or Not".  I read recently a response to Eve's book that questioned her about her willingness to enter into close personal friendships - even committed ones - with non-Christians. I thought I saw a link to that article on Eve's Twitter feed and maybe I was wrong - I've lost that article. But it took her to task for suggesting that a friendship with a non-believer could be a valuable as one with a believer.  Asking, again, the question about working out my salvation, I will note: there are some relationships within the Church that are salvific.  And some that are not.  There are some relationships outside of the Church that are salvific.  And there are some that are not.  One good thing at least: a non-believer will not join me in an engrossed gossip session about Church politics.

Eve confronts some issues that I recognize. The fear of  being so lonely that on is in danger of "being eaten by our cats" is one that made my day.  There are other, more serious dangers, though: the desire to be first, the desire to be exclusive, the temptation to get sexually involved, and the urge to make this friendship as much like a marriage as possible.  These are things I've done, getting jealous of straight male friends falling in love, getting married, etc.  See the earlier reflection about the imbalances caused by this particular weakness. There are too many TV shows and melodramas about same-sex attracted men and women who get married in their heads to their boss or their best friends and then go on murderous rampages.  For what it's worth, I've known a straight girl who ruined an entire office having a fake relationship with her boss.  I'm sure it was news to him.

Eve's advice in these situations is invaluable and very Orthodox: yes, you will. So buck up and don't do it again. We are human beings and we are prone to failure.  Can you be saved?  Yes. This failure of a friendship, right here, is what God has given you to use for that. We sin. Our very sins, through confession and forgiveness, become the rungs of our personal Ladder of Divine Ascent.  In Orthodoxy even our Death is part of God's toolkit for our salvation.  But how will we use it, that's the question we have to ask.

Eve doesn't address what do to with a few sorts and conditions of people: the ex who doesn't understand, the other party that wants to get into your pants (even deeply in love). Internet porn. She does address anonymous sex, but, truth be told, while I hate bringing sex to confession it is more embarrassing to admit that I don't hate confessing my anger, my judgementalism, my snobbishness. There are lots of books that address that sort of stuff, of course, but there are huge amounts of time when that's way more important to my life than my perceived or imagined (lack of) sex life.  It is good to note, however, that Eve's advice works here too: yes, you will. So buck up and don't do it again. We are human beings and we are prone to failure.

I'm not sure but I don't think Eve address the reactions of her gay friends. Do they feel judged? Do they still exist as friends?

I read Eve Tushnet's Gay and Catholic: Accepting My Sexuality, Finding Community, Living My Faith to explore the commonalities in our faith and living out those faiths.  By way of shorthand  I might explain, well, "I'm not Catholic and I'm not gay either."  I'm a sinner in the Orthodox Church. Such technicalities aside, though: I find Eve's reflection to be very helpful in sparking my own parallel reflections.  If I were to write such a book about being the sinner I am within the Orthodox church I might draw on many of the same sort of experiences and friendships used for the same sort of healing. While I wouldn't use the same sort of languages, I would be moving to the same ends. Our struggle to live our faith in a world increasingly unfriendly to that process of salvation. In my head Fr Joseph's Defeating Sin (I have not yet read Fire from Ashes which arrived from Amazon with the current volume) and Fr Meletios' Steps of Transformation address some of the same sort of material, they are more general. Gay and Catholic is well written for persons dealing with a specific sort of temptation. It's not about the theology or the teachings of the faith which are taken as a given, but rather about how to be faithful.  That it is written by someone who also is living the same sort of ascetic struggle (podvig, jihad) makes it very valuable for me.

Posted by Huw Richardson at 2:52 PM

Email ThisBlogThis!Share to TwitterShare to FacebookShare to Pinterest
Labels: tushnet